Welcome to our homepage! Triosonate is a musical ensemble based in Tuscany, Italy, including flutist Stefano Agostini and guitarists Veronica Barsotti and Salvo Marcuccio. We are presently occupied with recording Bach’s entire body of triosonata-like instrumental works.

Triosonate was established in 2015 after an idea by Salvo. We were driven together by a long standing friendship and by an equally strong love for Bach’s music. With our (admittedly, quite unusual!) instrumental combination, the chances of playing anything by our preferred author were zero, so we had to resort to that most questionable musical practice – transcription. Even so, we realized soon that, in spite of the many advantages of two guitars over just one, the extent of adaptation required was too much to do justice to Bach’s music.

Most of baroque keyboard music requires a range of five octaves, give or take a few notes, while the six-string classical guitar only has three octaves and a sixth. Thus, arrangers past and present feel forced to squeeze the musical text – Bach’s exquisite counterpoint – in a box too small for it, and they do so by way of frequent, arbitrary changes of register of one voice or another. As a result, polyphony is compressed into cramped lines that often cross where they shouldn’t, and the music – although harmonically correct – sounds confused and innatural.

We don’t play arrangements. On the contrary, our transcriptions are true to the original thanks to the use of innovative stringing of the guitars. We play perfectly normal classical guitars with very special strings, so to stretch the range of the guitar duo to cover Bach’s original texture; and in doing so, we allow the guitars’ unique sound and the warmth of Stefano’s flute to project a new, revealing light on some of the finest music ever written. 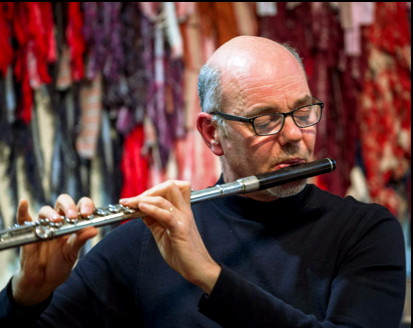 Stefano Agostini, flute
After graduating cum laude in 1975, Stefano went on to earn his Solistendiplom at the Winterthur conservatory in Switzerland with Conrad Klemm. He enjoyed a long career as first flute in various orchestras and as a member of chamber ensembles, both in Italy and abroad. With a keen interest in contemporary arts, in improvisation and in the relation between music and other artistic languages, he works with several composers, dance ensembles and teather companies. He premiered several new compositions and provided the music settings for theater pieces. Since 1977, Stefano teaches at the “P. Mascagni” Conservatory in Leghorn, which he directed in 2006-13, as well as in seminars and masterclasses at various institutions. 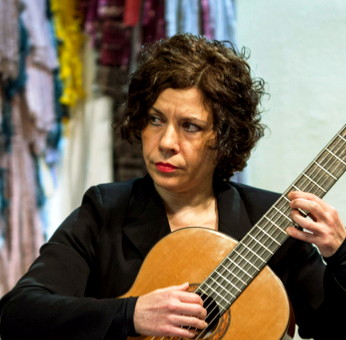 Veronica Barsotti, guitar
Veronica got her master degree at DAMS in Bologna with a thesis in Philosophy of Music, then moved to a master degree in guitar with honours at La Spezia Conservatory with Fabio Renato D’Ettorre. She continued her guitar studies with R. Frosali and A. Borghese at Fiesole and attended masterclasses with the Assad brothers, D. Russel, G. Bandini, M. Mela, G. Fernandez, L. Micheli, A. Zohn e R. Todd, M. Heizman e J. Panetsos. At the Accademia Chigiana in Siena she studied with O. Ghiglia, earning herself a Honours dipoma. Winner of various competitions (first prize at ANEMOS Rome, Ortona, Riviera Etrusca, AGIMUS Siracusa; second prize at Lamporecchio, Viareggio, etc.), she worked at the Maggio Musicale Fiorentino with Z. Mehta e R. Abbado. Veronica teaches at Liceo Musicale in Leghorn and at Accademia della Chitarra in Pontedera. 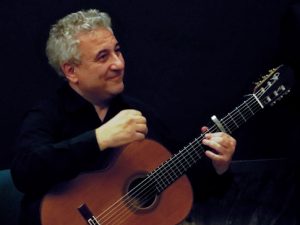 Salvo Marcuccio, guitar
Salvo graduated cum laude in classical guitar in 1989. He studied with Oscar Ghiglia at Accademia Chigiana in Siena and attended masterclasses with Leo Brouwer and the Assad duo. Winner of the international chamber music competitions at Stresa and Macerata Feltria, he took part in musical theater productions as an author and as an interpreter, promoting and premiering new compositions for guitar, alone or in chamber music settings. He has authored a large number of transcriptions for guitar and guitar ensembles. In 2005-2013 Salvo was in charge of teaching Musical Acoustics at the Leghorn Conservatory. He is the artistic director of Accademia della Chitarra in Pontedera.

We started the Bach Project in 2016 with the harpsichord-violin sonatas. This magnificent set, one of the highest peaks in Bach’s production, includes five sonatas (BWV1014 to BWV1018) in the “standard” sonata da chiesa four movement format (slow-fast-slow-fast) and one in an un precedented five movement shape (BWV 1019), with a central allegro for solo harpsichord (!) flanked by two slow movements, with opening and closing allegros. The six sonatas include most of the availbale musical styles of Bach’s time, from italian concerto allegros, to cantata duets, to intricate fugal writing.